A note to the reader: Please make sure that you read the ingredients thoroughly before purchasing any item, especially food because you are responsible before God for what you put into the body.

The goal of gaining public acceptance for eating insects instead of meat is now part of the Public Broadcasting Service (PBS) effort. The larger climate change objective is to “transition” the global food supply away from cows, pigs and chickens, and toward a more sustainable lifestyle of eating insects and bugs. Farmers in North American and Europe are facing massive regulatory changes as part of the Build Back Better or Green New Deal initiatives.

In the U.S. Joe Biden has pledged his entire administration effort toward the goal of reducing U.S. carbon emissions and protecting the planet. Part of that initiative includes the need to change the diet of Americans away from traditional farm proteins, and toward sustainable alternatives via bugs and/or insects like cockroaches, crickets and grasshoppers.

A comprehensive marketing, branding and image campaign is underway to change the public perception toward an acceptance of sustainable algae and bugs as food sources. Public Broadcasting (PBS) is part of that imitative: 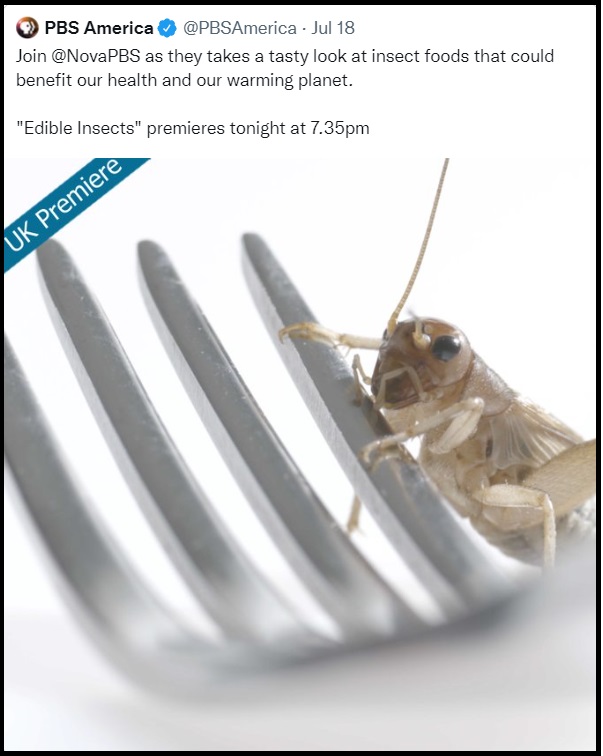 Several U.S. food manufacturers now include insects and bugs as part of their ingredient list. It would be worthwhile checking the labels on the latest snack foods to identify the percentages of worms and bugs that may be included in your favorite salted snack.

Additionally, a significant investment has taken place in Canada where they are now generating 9,000 metric tons of crickets to replace traditional protein sources (link). The public/private partnership in London, Ontario, is now shipping crickets for use by North American food manufacturers. There has been minimal public pushback against the effort and the government appears to be fast-tracking insects as food alternatives for global shortages of grain and meats.

In the United Kingdom, the government is now taking public feedback on the use of insects in the food supply. According to a recent public notification from the U.K. Food Standards Agency, they are working toward an acceptable standard across the industry for insects and worms in the food supply.

From the notification: “A consultation on a proposed legislated transitional period under the novel food regulations for edible insects in England, Scotland and Wales. The proposal has been developed with input from Food Standards Scotland (FSS).” (more) 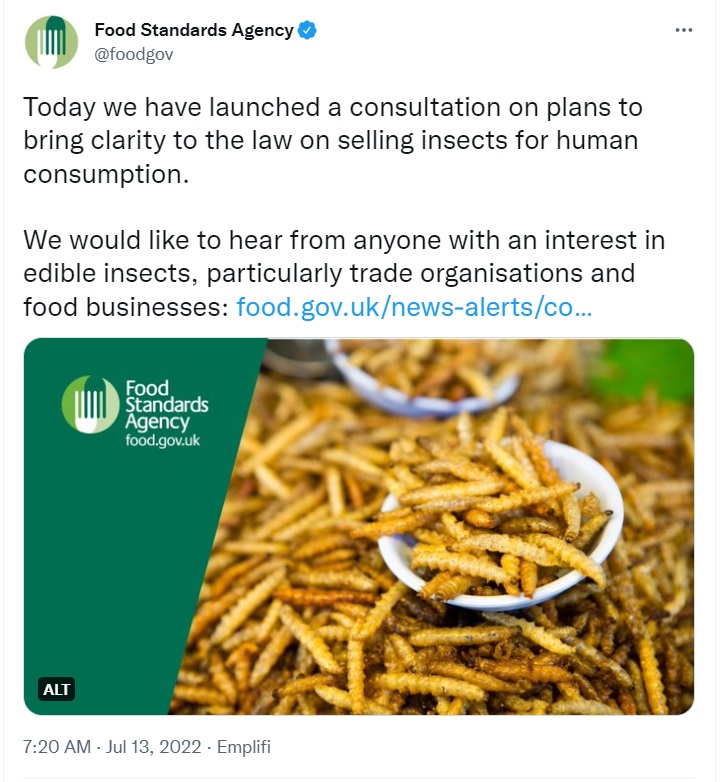 As farmland across Europe and North America increasingly comes under enhanced “climate change” regulation from government, we can expect the speed of food supply transitioning to insects to increase exponentially.

With PBS now joining the chorus of insect food promotion; and with the increasingly discussed pending global food shortage now looming; it would appear that western leaders are following the advice from the World Economic Forum and preparing their citizens in Europe and North America to accept insects as food.

As noted earlier, you may already be eating the insects and just not be aware of it. Apparently, people who are allergic to shellfish should be more concerned and diligent about the ingredients of the food they consume, as insects may generate the same allergic reaction.

Prophetic Application: Are you ready to obey the governments and the Papacy by eating maggots, bugs, worms, slugs, crickets, or any other creepy crawling critter in other to “save the planet from Climate change”?
“What? know ye not that your body is the temple of the Holy Ghost which is in you, which ye have of God, and ye are not your own? For ye are bought with a price: therefore glorify God in your body, and in your spirit, which are God’s.”1 Corinthians 6:19
“If any man defile the temple of God, him shall God destroy; for the temple of God is holy, which temple ye are.”1 Corinthians 3:17

I watched the movie soylent green many years ago and i have never heard anyone talked about it until you mentioned it in one of your previous presentation (video). I always wondered if that movie was real but i realise it is actually coming to life now.